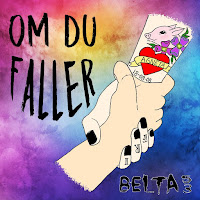 This is without a doubt the best release from Belta 53 so far. I would describe their earlier style as some kind of punk influenced alternative rock but this record is stuffed with nice melodic pop punk. I was hoping years ago that they would choose this path so I am very satisfied.

The lyrics are good as always  and especially "En kväll i augusti" which is about the tragic murder of the homeless Romanian guy Gica who lived in a park in Sweden. A stunning rock ballad with lot's of feelings. It's actually a candidate for the best ballad of the year.

There is something special with female fronted bands and Jojo has a voice that fits perfect to the music. It doens't matter if it's a fast or slow song, she makes it perfect all the time. It's easy to try to comparing other female singers but I can't think of anyone else that sounds like Jojo.

Belta 53 have their own sound which is pretty Swedish in some way. That's why it's hard to compare them with other bands from around the world. But I would say there's small parts from bands such as Descendents and New Found Glory. But still very Swedish. Anyway, there's lot's of good rock n roll riffs and melodies and the opening song "Fri" is probably the best song they've ever done.